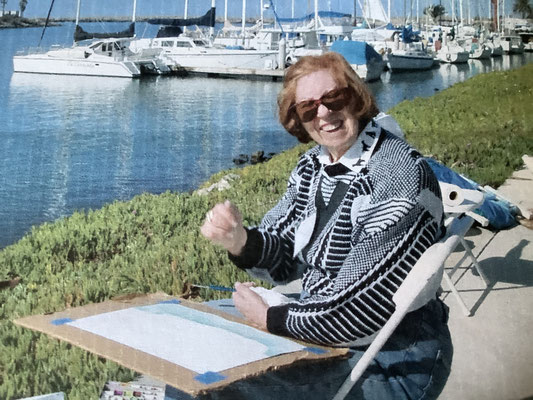 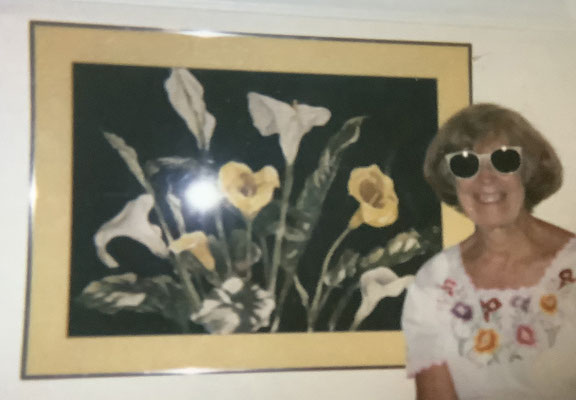 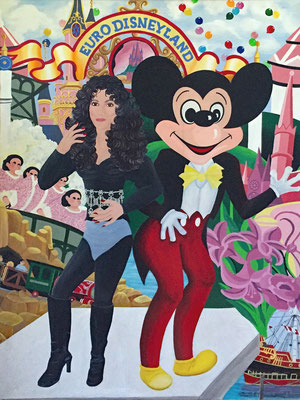 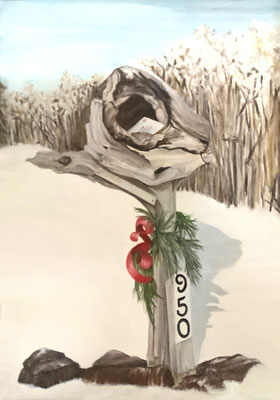 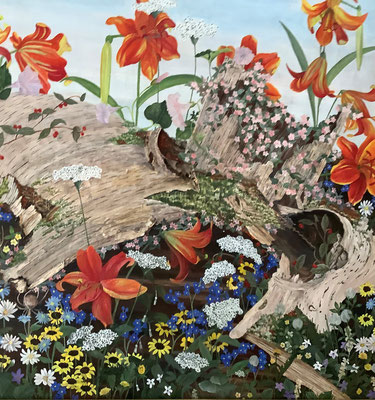 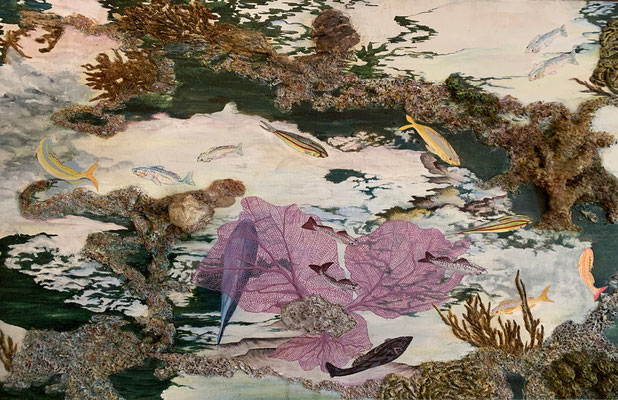 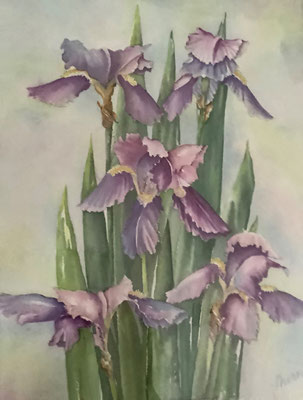 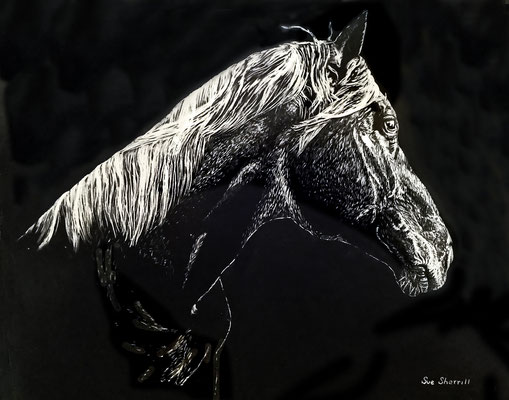 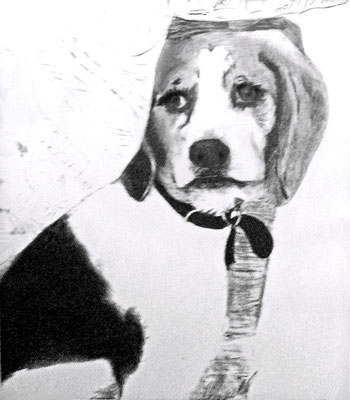 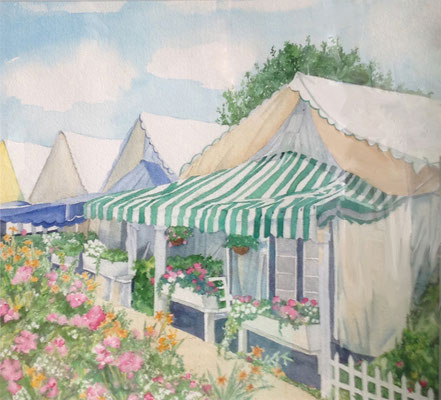 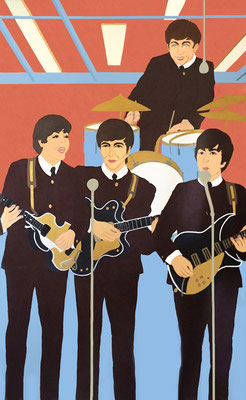 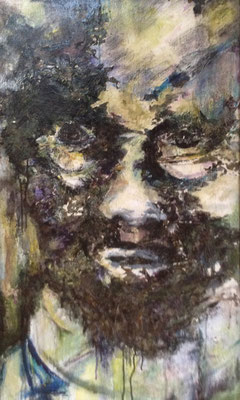 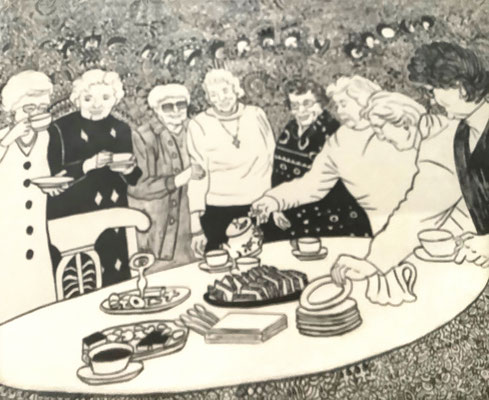 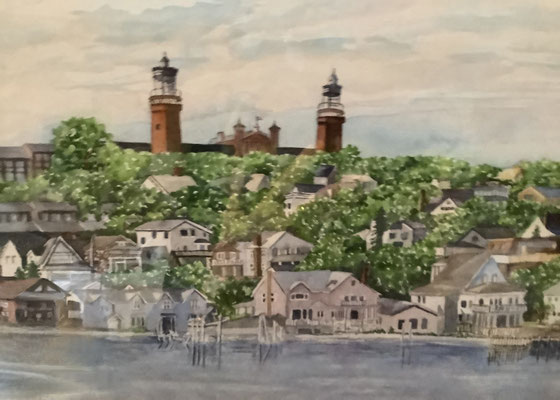 One hundred years ago in Philadelphia, Sue Sherrill was born into a world that was recovering from the devastation of WW I. She was raised by her father and aunts and grew up with a lot of freedom.  Her mother traveled extensively (setting up millinery shops across the country), and Sue was used to being independent.  In her words, “I did pretty much what wanted.” When asked how she knew she was going to be an artist Sue told the following story:

“I remember being invited to my friend’s birthday party when I was eight years old. The family didn’t have the money to buy a Pin the Tail on the Donkey party game, so the girl’s mother improvised by taping a large sheet of paper to the wall.  Each child took turns being blindfolded and tried to draw a face on the paper.  My drawing was the only one that looked like a face; I won the prize and began thinking of myself as an artist. Then my playmates started asking me to design dresses for their paper dolls, and I really liked it.”

Sue’s artistic skills were recognized in high school art classes and she was encouraged to enroll in art school. Unfortunately, there was no extra money for college tuition. So Sue found employment as a hat check girl, working in several of Philly’s big hotels. There she met many celebrities including Joe DiMaggio, the Dorsey brothers, and a number of athletes and musicians.  The job suited her outgoing personality, but when WWII broke out Sue decided to follow the example of over 150,000 women and enlisted in the Women’s Army Auxiliary Corps (WAAC) which eventually became the Women’s Army Corps (WAC).  Never before had women, with the exception of nurses, served within the ranks of the U.S. Army.

Sue served her country for over two years, primarily working as an x-ray technician. When an Army doctor on base found out about her artistic ability, she was asked to illustrate a medical textbook.  Another opportunity presented itself in an area that Sue was also good at – sports.  She was a player on the WAC basketball team. They competed against other women’s teams from local military bases. Sue even became a dance instructor on the base for G.I.s with two left feet.

When Sue left the Army she used the G.I. Bill to enroll in Moore College of Art where she received her Bachelor of Fine Arts degree.  She later attended Douglas College, a part of Rutgers University, and received a Master’s degree in Fine Arts.  Her most notable professor was Roy Lichtenstein who became world famous in the Pop Art movement.  Following college Sue became a free-lance textile designer.

Then came marriage and motherhood. Although she continued to seek textile design work, Sue needed a job that gave her more time with her son, Steve. When an elementary teaching position became available, she applied for it and was offered a contract. Eventually, Sue became an art teacher in the Long Branch Public Schools where she taught primary grades through high school. She also taught art classes to students at Monmouth College (University).

Throughout her career she has shown her work at numerous art venues, and garnered a considerable number of awards. Although she is best known for her beautiful watercolors, she has also worked in acrylic, pencil, charcoal, brush and ink, and mixed media.

A love of travel is reflected in Sue’s compositions.* She has visited over twenty-five countries, several islands, and many states. One of Sue’s prized possessions is a travel hat that displays pins from these places. When she lived in Iran for a year, she assisted the Iranian Esfahan Players in set design for a play they were going to perform. She tells a fascinating story about one of her paintings that had to be cut into three pieces in order to get it through customs to send home to New Jersey.

Her work has been shown in the following places:

Sue retired from education in 1986, but growing older has not stopped her creative juices from flowing.  Two years ago she designed and painted a wall mural in her Florida condominium. She tried her hand at animal portraiture when her grandson, Doug, requested a painting of his dog.  And she has won several floral design awards from garden clubs competitions. When speaking about art, Sue says,

“I am inspired by nature, something that I see that appeals to me, and sometimes by life’s experience. I believe art is a way for one to express one’s self in a most meaningful way. As you mature you gain your own perspective which is shown in your work. Art has given me happiness or I wouldn’t have done it most of my life.”

As much as Sue loves art, her face takes on a special glow when she shares stories about her three grandchildren and three great-grandchildren (with another on the way). Growing up as an only child who moved around a lot, family is a very important part of Sue Sherrill’s life. It is a life of art and design that spans one hundred years.

Stephanie's Notes:
Fall 1961 Sue Sherrill & I  met in Roy Lichtenstein's Painting & Drawing class, Douglass  College, Rutgers University. Sue was a graduate student, and I was an undergraduate.
Both being art majors, we became friends. We were at the right place at the right time.
The art scene was morphing from Abstract Expressionism to something never seen or heard of before. We got caught up in the beginning of a new art movement...POP ART.
We became part of a new trend...ART ABOUT ART. Subjects selected from current society, the home, and often exaggerated in size : stacks of Campbell soup cans, Brillo boxes, comic books, commercial design. Roy Lichtenstein scheduled class trips to New York City galleries, openings and receptions to meet rising POP artists, Tom Wesselman, Claes Oldenburg. Helen Frankenthaler, wife of Robert Motherwell, both abstract expressionist artists, lectured during our painting class. George Segal, sculptor, art teacher, Graduate assistant. In Andre Watts sculpture class was exploring the potential of gauze impregnated with dry plaster donated by J&J, holding Art Happenings at his family chicken farm. We were inspired by these experiences and encounters to open our minds to new possibilities.  Sue and I enjoyed lengthy careers as innovative art educators in the New Jersey public School system. Sue also taught at Monmouth University. Forty-three years later in 2004, we met again at the Arts Society Monmouth County monthly Coffee Hour and Art Demo. Monmouth Beach Cultural Center.
Sue has given her heart and time as a very active supportive member of ASMC.
*Attending Coffee Hours & Art Demos + Speakers,  luncheons, brunches, Exhibit Receptions.
*Participating in Exhibits, winning awards.
*Donating gift items, making gift baskets for fundraising raffles
*Offering her help in any way needed.
When my husband and I were ASMC co-presidents, she submitted a prize-winning very large abstract expressionist painting. She said "I have something very special for you to exhibit."
*Volunteered to check arriving guests and reservations  at ASMC Holiday Brunch.
I am glad we were part of each other's journey .
With much fondness and gratitude
I wish you a Happy 100th Birthday Sue!
Fondly, Stephanie Frank

Select purpose (Dues, Entry Fees, Donation) and include Name of Exhibit in the Notes. Thank you!

...or to use your PayPal account, go to PayPal.com and search for our email: "asmc722@gmail.com"